Entertainment marketing: Everything you need to know 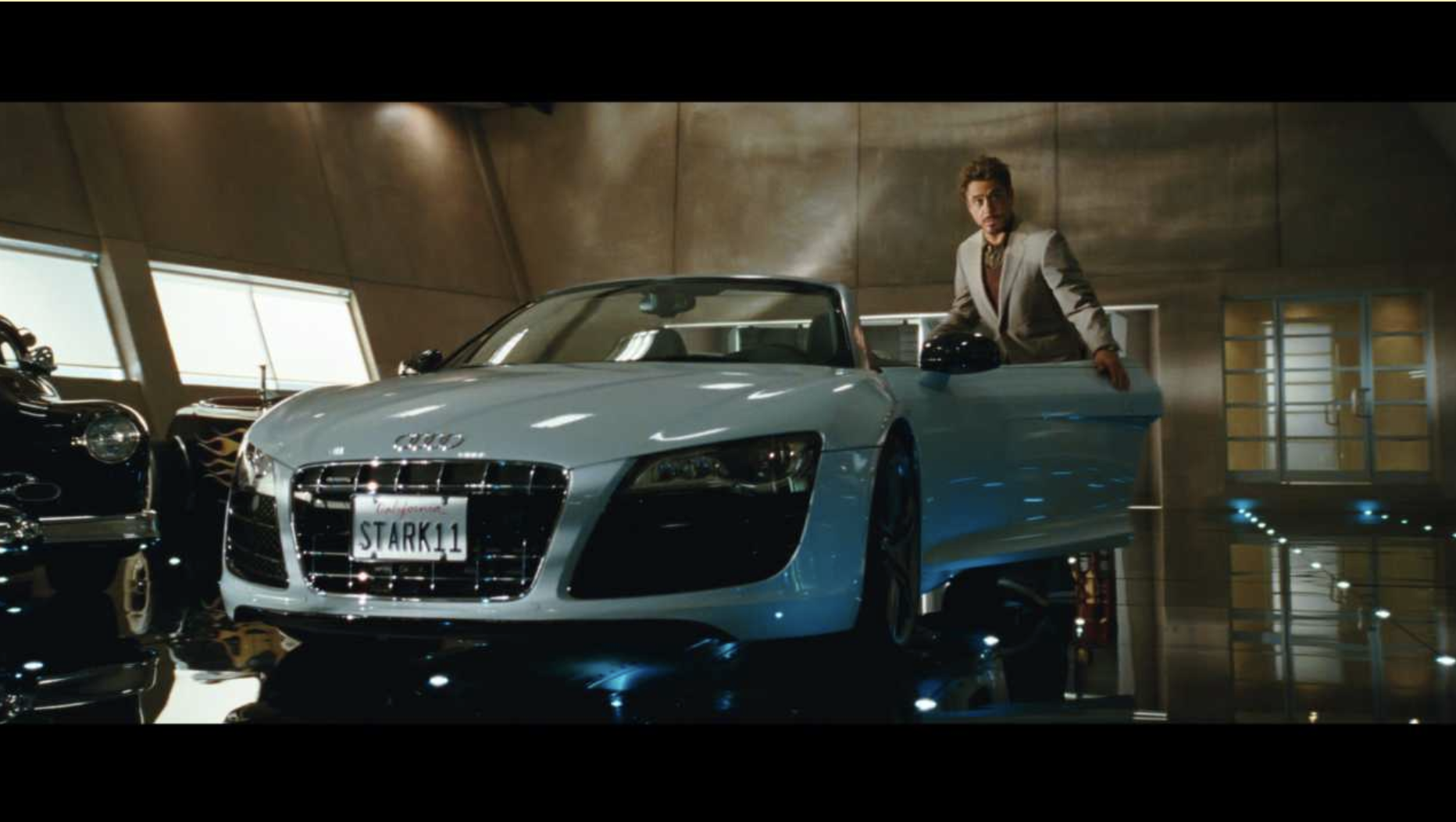 Entertainment marketing: Everything you need to know

Entertainment marketing is marketing optimized for entertainment-specific media and contexts. This can include campaigns that run within movies and video games, as well as at events and on the social media feeds of performers, celebrities and influencers. It revolves around partnerships between entertainment producers/organizations and brands in other industries, who often co-promote one another.

Well-executed entertainment marketing will generate brand awareness and in turn monetize that interest. Indeed, like marketing in general, entertainment marketing aims to drive revenue, for instance by inspiring the purchase of a pizza brand featured in a film. I mean, how many people found themselves wanting Pizza Hut after this scene, seamlessly integrated into 1992 hit “Wayne’s World”?

There are multiple other types of, and avenues for, entertainment marketing, too. Product placements (like the above), brand integration in TV shows, high-profile celebrity endorsements on YouTube and co-promotional/licensing campaigns are all fair game.

What are the benefits of entertainment marketing?

In a Frontiers in Psychology study assessing the efficacy of product placement — one of the most popular types of entertainment marketing — researchers identified several key advantages of product placement, including its ability to reach specific audiences and to come off more naturally than direct commercial advertising.

More specifically, product placement works because the viewer’s attention is usually concentrated on the medium in question (e.g., a streaming TV show) and not some other activity, as might be the case when a commercial begins. This makes it ideal on platforms such as Netflix, and in media such as feature-length films or console games, that are technically ad-free.

Brands can also select entertainment media based on the expected demographics of the audience, a more nuanced form of targeting than a typical banner ad, billboard or 30-second TV spot allows for.

To summarize, entertainment marketing lives within its media, rather than apart from it. There’s nothing to “skip” or “block,” as the marketing message is a literal part of the entertainment.

So what separates entertainment marketing from advertising?

Advertising vs. entertainment marketing — and why brands often choose the latter

As a whole, entertainment marketing has a lot in common with both general marketing and public relations. They’re all designed to fulfill customer needs (like marketing) and to create mutually beneficial relationships between a brand and its audiences (like PR). No matter the form, though, entertainment marketing is not advertising, as it is more subtle in execution and more expansive in content.

Advertising is a subset of marketing, one that includes only paid placements, over which the brand has complete control. Ads broadcast one-way messages to audiences typically already aware of the product or service in question. They can be targeted, of course, but often in ways that seem awkward or creepy.

In contrast, entertainment marketing will go deeper and focus on understanding and meeting audience needs as seamlessly as possible, through multiple possible strategies. For example, the marketers behind a campaign might research the target demographic for a certain car and discern the types of media (e.g., blockbuster action films) its members enjoy in their leisure time — just as the Frontiers in Psychology researchers discussed.

This type of process led to this blink-and-you’ll-miss-it product placement of an Audi hood ornament (nearly lost in the glare) in “Iron Man 2”:

This is not an “ad” per se, since it’s more shared than paid media (if we’re going by the popular PESO model used in PR practice) and is not the main focus of the show. Indeed, entertainment marketing won’t usually incorporate a direct paid component, and will instead leverage a combination of these earned, shared and owned channels to reach its audiences.

The “Iron Man 2” screengrab is an example of one of the most popular forms of entertainment marketing, namely product placement (one could argue that the repeated mention of the film’s title in this post is itself a subtle form of such placement, too!). A Hollywood Branded Inc. industry survey found that more than half of brands had explored product placement, more than any other strategy.

Let’s look at how product placement and the other major entertainment marketing strategies work, along with some real-world examples of each one.

The most common (and effective) entertainment marketing strategies

We’ve already dug pretty deep into this one. Still, it’s worth exploring a little further since it’s such a proven practice and one that embodies the overarching spirit of entertainment marketing.

Consider this screenshot from the 2019 PC and console game, “No More Heroes: Travis Strikes Again.” In it, the character can customize his outfit with logoed t-shirts, most of which are from other independent game properties. Meanwhile, the proprietary Unreal Engine is advertised as a desktop shortcut (annotations added to indicate examples). 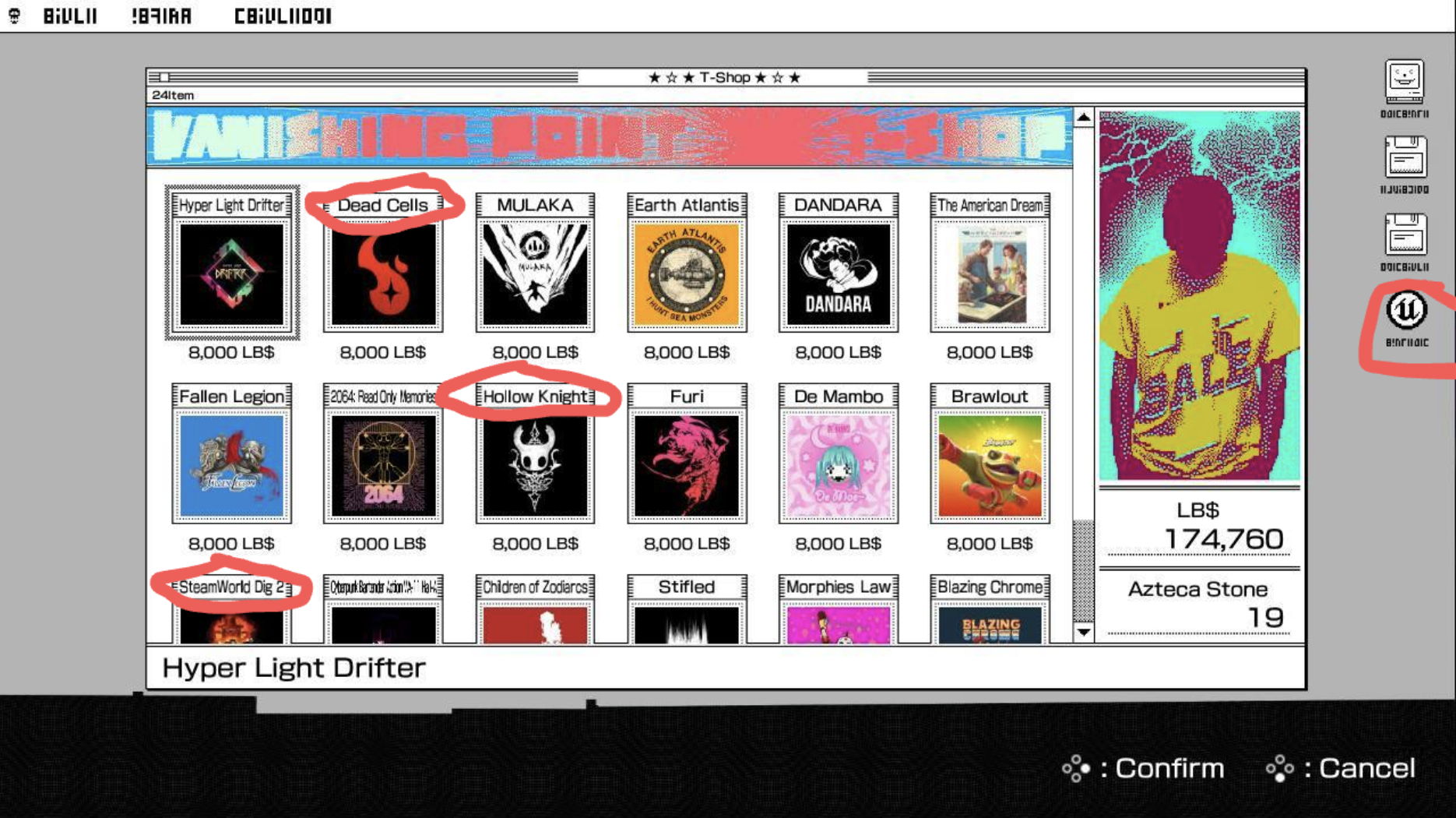 The total effect is one of raising brand awareness of other game titles and of the Unreal Engine itself — all with no direct, screen-hijacking advertising required.

Whereas Tony Stark’s Audi is an example of visual product placement — with the actual product being marketed visible on screen — the “No More Heroes” shop screen is a bit more subtle, as it merely shows the product name. This technique is sometimes called “signage placement.”

Another type of product placement is verbal placement, which is when someone simply says the name of a brand. In the TV show “30 Rock,” such mentions were common, including an instance of NBC president Jack Donaghy saying “Oh, you can’t do that. The Capital One Venture Card is amazing!”

What if a brand’s product or service is not only featured in an entertainment context but deeply embedded into or integral to the actual plot of the movie, TV show, game, etc.? In this case, you have an instance of brand integration, rather than product placement.

Brand integration is everywhere. The Drum estimated that in 2017, 92% of the 25 most popular streaming shows featured some form of brand integration. For example, Hulu’s “Four Weddings and a Funeral” made the booking website Hotels.com essential to one of its episodes, by having the brand sponsor a couple’s wedding. The bride mentions the company in her vows, while brand mascot Captain Obvious even shows up to DJ.

In the screengrab below (annotation added), you can see one instance of the Hotels.com logo. But unlike the “No More Heroes” example above featuring the other indie games, this partnership between Hulu and Hotels.com is deeper, as the brand is completely inseparable from the episode’s proceedings. 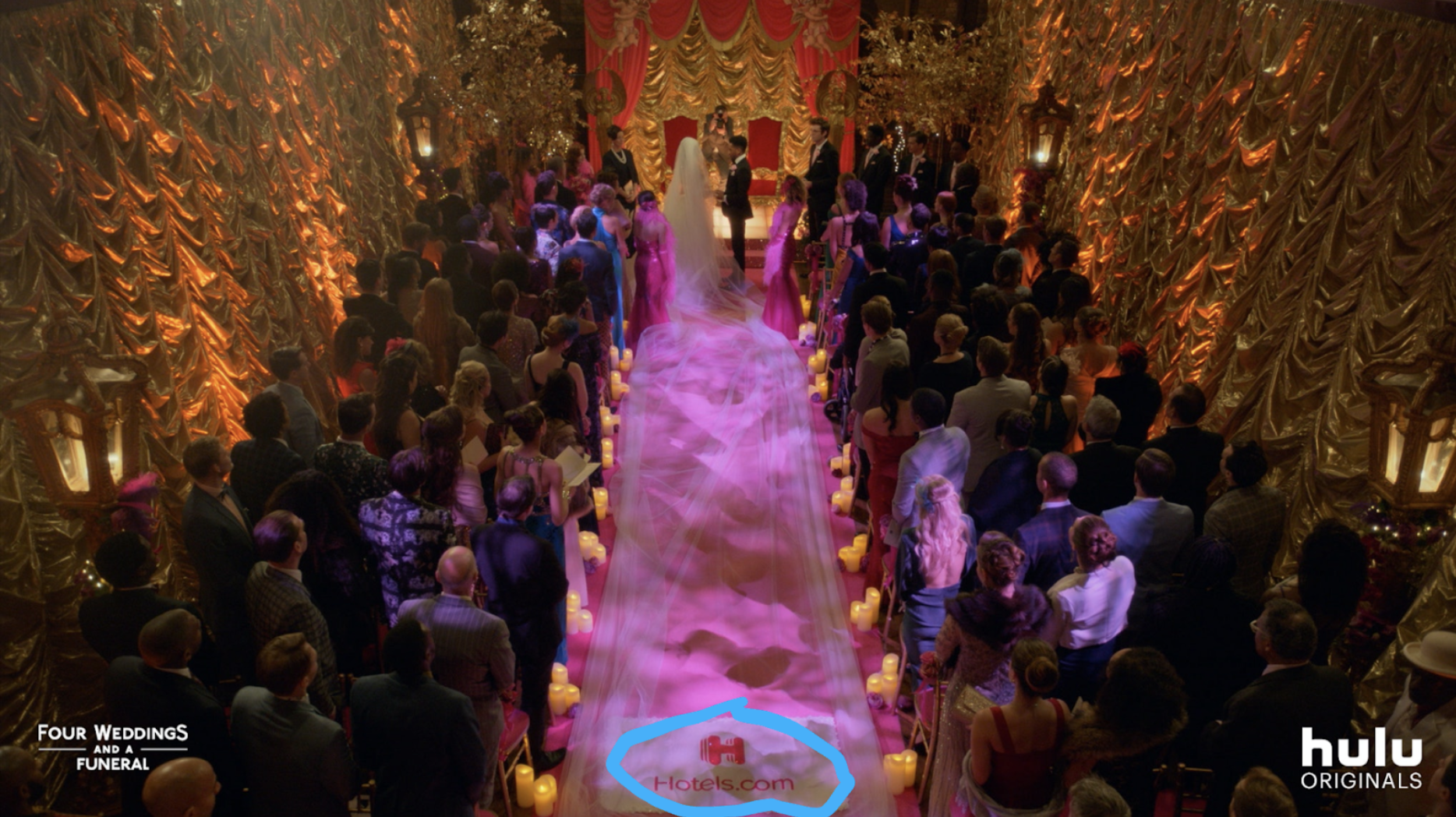 The official Hotels.com Twitter account also highlighted how its customers could get similar sponsorship for their honeymoons via a contest, and advertised “Four Weddings and a Funeral” in the process:

This promotion highlights a central feature of many entertainment marketing campaigns, namely co-promotion. In this case, Hulu is running sponcon (sponsored content) from Hotels.com to generate interest in that brand, while Hotels.com is promoting a Hulu Original on its social media accounts to encourage people to watch the show. It’s a mutually beneficial and reinforcing relationship for the two.

Such co-promotion is so common that it deserves its own section, so read on!

If you watched the third season of “Stranger Things,” you might remember New Coke — The Coca-Cola Company’s failed attempt to reformulate its flagship beverage in the 1980s — being featured prominently, as in the screengrab below:

New Coke in “Stranger Things” is more visual product placement (with a few verbal mentions, too) than brand integration, as the soft drink isn’t integral to the plot. But it’s also more than that.

The placement of New Coke in the show aligned with Coca-Cola’s revival of the long-discontinued soda. Cans of New Coke, co-branded with the “Stranger Things” logo, became available for online purchase and in select specialized vending machines. Here’s one from my personal collection: 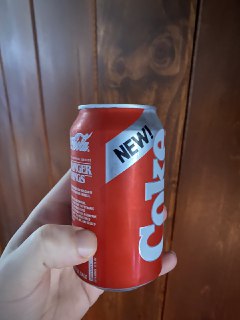 And here’s Coca-Cola’s official Twitter account name-dropping the show in a reply to a customer and pointing them to a company site for more information about the upside-down vending machines:

As with Hulu and Hotels.com, this is a highly effective co-promotion strategy, designed to get consumers to spend with both of the brands involved. But the Netflix-Coke partnership also demonstrates how even minor product placement — and not just deep brand integration — can become a launching pad for a major entertainment marketing campaign.

When a prominent figure or influencer gives an endorsement, the ripple effects can be immense. Celebrity endorsements, for example, can instantly put a specific product or service in front of an audience of literally millions. Here’s actress and Twitch streamer Stella Hudgens making a nuanced pitch for Daily Dose Haircare by running a giveaway contest:

GIVEAWAY TIME!!! – I love a good leave-in conditioner and @dailydosehaircare makes my hair manageable, instantly detangles (which is a huge issue for me as my hair tangles soo QUICK), adds moisture, eliminates frizz, protects color, repairs & strengthens. This brand is vegan & cruelty-free which is AMAZING and also gives back by supporting clean water projects in developing countries <3 #ad I’ve teamed up with @dailydosehaircare and we’re giving away a year’s supply to two of y’all beautiful people! To enter: ⁠ ✨Follow @dailydosehaircare⁠ and me @stellahudgens ✨ Like this post ✨Comment and tell me one goal you’ve made for this year! ✨Tag your friends for an extra entry!⁠ TWO (2) winners will win six (6) full-size bottles of Daily Dose. Winner will be chosen at random from valid entries. Giveaway ends January 24, 2020 at 11:59PM PT. To Jan 30, 2020. Open to US, CAN, and Puerto Rico residents only. Winner will be notified via DM. This giveaway is not sponsored or endorsed by Instagram/Facebook.⁠ #dailydosehaircare #sallybeauty #leaveinconditioner #veganhaircare #glutenfreehaircare #betterforyouhaircare #parabenfree #cleanerbeauty

Avoiding the appearance of being an ad while also framing the presenter as a relatable person — someone who needs their hair detangled, in this case — is important to the success of any endorsement-led entertainment marketing campaign. The 2020 Trust Barometer from Edelman found that “a person like yourself” was the third-most trusted source of information among respondents, trailing only technical and academic experts. The influencer marketing phenomenon is in large part a direct response to this demand for “relatable” recommenders.

This midsized influencer account (approximately 77k followers as of Aug. 2020), which normally posts dog photos, is an archetypal example of the two types of marketing intersecting. The account manager seized an opportunity to promote the Disney+ show “The Mandalorian” by having the dog don a Boba Fett helmet:

Last but not least, licensing combines aspects of brand integration and co-promotion. A licensed property is an overt partnership between a rights holder and a licensee, with the latter using the former’s intellectual property with permission to attract a particular audience.

Consider the 2010 cult classic Nintendo Wii game, “Epic Mickey,” which developer Junction Point and publisher Nintendo created with a license from the Walt Disney Company. On a basic level, this partnership was beneficial for everyone involved:

Within the game itself, there was also some product placement, as in the screengrab below in which the Nintendo Entertainment System’s distinctive cartridges are shown in one of the levels:

How to create an entertainment marketing plan

Any entertainment marketing will require forming partnerships with stakeholders in the entertainment industry and/or relevant influencers. This general template is a good starting point, as it outlines the most critical steps to take when thinking about how to create an appropriate strategy, including:

Entertainment marketing is effective, and it will only become more prominent in media of all types. This will happen primarily as a result of cord-cutting replacing linear TV and the gaming industry continuing its long-term expansion, among other key trends. By recognizing and experimenting with the common strategies we’ve discussed here, you can find the right audience at the right time on the right platform for your brand.