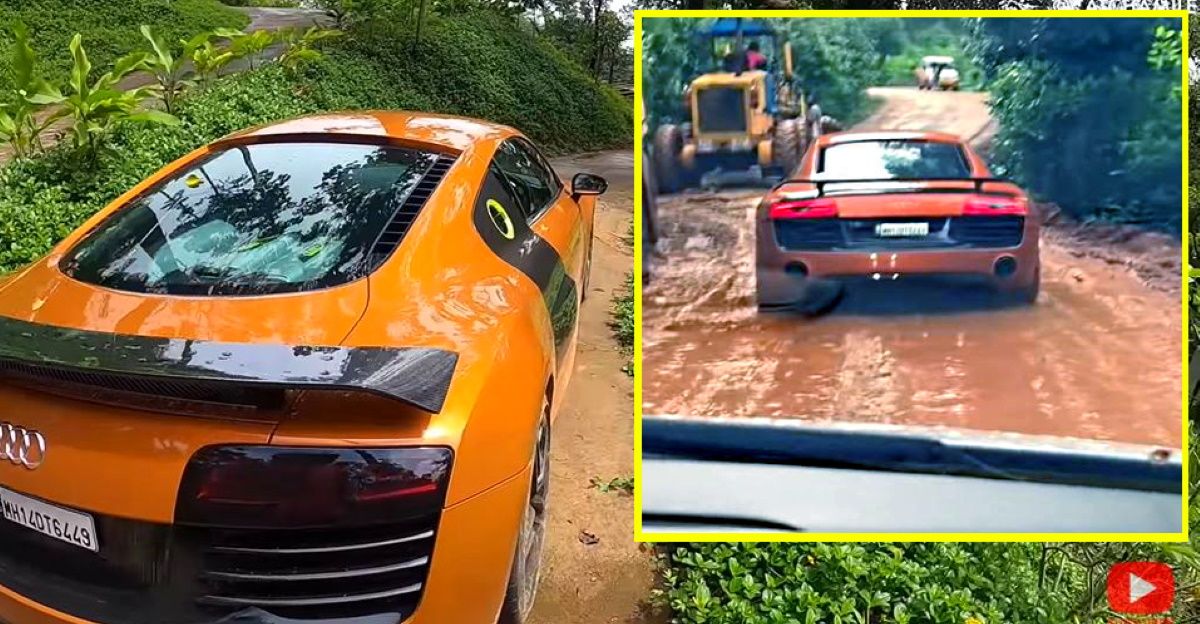 With the rising number of imported vehicles on the Indian roads and improving infrastructure, many supercar owners are taking their multi-crore vehicles outside the city limits. However, the Indian roads are still full of surprises and at times, even mass-segment cars struggle on many stretches. Most Indian roads and highways are full of illegal speed breakers and there is no dearth of potholes and on-going construction too. Since supercars require smooth tarmac, preferably without any speed breakers, taking them on a road trip in India can call of trouble as this Audi R8 owner realised. Here is what happened.

This Audi R8 owner took his beloved car from Bangalore on a road trip to Coorg. While the travelling vlog shows that the car was on good roads most of the time, the pre-monsoon season ensured trouble ahead. The rain quickly deteriorated the road conditions and soon the Audi R8 reached roads covered in slush. However, with patience and control, the owner of the sports car clears all the challenges without any heart-stopping moment to reach his final destination – Coorg.

Coorg is a popular hill station and is flocked by tourists from different parts of the country. The owner of the Audi R8 said on the video that he did face many extreme challenges but only on a few sections of the car. He also says that he felt like the car will get stuck while going through slush but nothing like that happened. The road conditions to Coorg do not remain in the best condition around the year. However, the owner was brave enough to take such an expensive vehicle to an unknown territory.

The Audi R8 is one of the most practical sports cars that you can buy in India. It offers a ground clearance of 160mm, which is similar to many mass-segment vehicles available in the Indian market. A driver who is well-aware of the vehicle and how it will behave on different road conditions can handle such situations without much of a problem. Still, there remains a fear of the unknown as roadside assistance is also not available easily in some of the areas. This is why most performance car owners keep themselves restricted inside the city limits where they know the roads and help is available easily.

This is not the first incident where a supercar owner ventured into the unknown and got surprises. Here is a video of the Lamborghini Huracan that got stuck on a broken section of the road in a hilly region. The Huracan was seen struggling in the video and we are not sure about how it was recovered from this spot.

Supercars cannot be towed like regular vehicles. Since they have low approach and departure angles, most of the supercars require flatbed. A flatbed reaching such areas to recover supercars can be a daunting task too. Recently, a viral video showing a group of supercar owners going through the narrow streets of Rajasthan became viral. The convoy of supercars can be seen moving with the police cars.

The post When you take a 2 crore rupee supercar off the road in India [Video] first appeared on Cartoq.